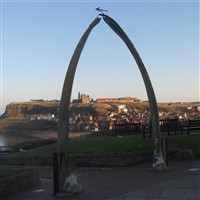 Enjoy a day out in Whitby for the Whitby Goth Weekend

There’s more to Whitby than meets the eye – with its connections to Captain Cook and Dracula, its quirky narrow streets and bustling harbour overlooked by the striking Gothic ruins of Whitby Abbey, Whitby is a fascinating town, unlike any other.

Enjoy the quirky fishing villages of Staithes and Robin Hood’s Bay, the unspoilt sandy beaches of Sandsend and Runswick Bay, the staggering views from the clifftops at Ravenscar, and the popular seaside resorts of Saltburn and Redcar.

Enjoy the 800km of bridleways that weave through the peaceful and colourful countryside of the North York Moors National Park, which surrounds Whitby town.