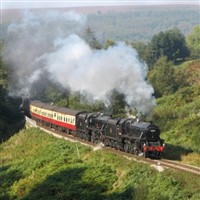 In June 1967 a small group of local people formed the North Yorkshire Moors Railway Preservation Society. Its members were convinced that operating the line between Grosmont and Pickering could be viable if sufficient voluntary help was forthcoming. From one person in 1972 the numbers have grown with over 550 volunteers. Today the North York Moors Historical Railway Trust is a not-for profit charitable organisation run as part of the local community. Day to day operation is carried out by volunteers with railway operations and business experience. With a core team of paid staff together with approximately 100 full time staff and 50 seasonal staff, the charity operates the train services and works steadily to improve the quality of the infrastructure, the railway vehicles and experience to our visitors travelling on the railway. Every visitor that travels on the railway helps preserve one of the world's greatest railway experiences. The railway operates with the support and commitment of over 550 volunteers.

There’s more to Whitby than meets the eye – with its connections to Captain Cook and Dracula, its quirky narrow streets and bustling harbour overlooked by the striking Gothic ruins of Whitby Abbey, Whitby is a fascinating town, unlike any other. Enjoy the quirky fishing villages of Staithes and Robin Hood’s Bay, the unspoilt sandy beaches of Sandsend and Runswick Bay, the staggering views from the clifftops at Ravenscar, and the popular seaside resorts of Saltburn and Redcar. Enjoy the 800km of bridleways that weave through the peaceful and colourful countryside of the North York Moors National Park, which surrounds Whitby town.

The majority of trips return from destination between 16:30 and 17:30. The driver will inform you of the exact time on the day, dependant on outward travel times. Whilst we do not guarantee a W/C on board most of our excursion fleet do have toilet facilities. For your comfort we allocate seating at time of booking, however reserve the right to alter or amend your seat allocation for utilisation purposes

Our Pick-ups are as follows: