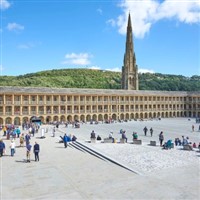 The Grade I listed Piece Hall, Halifax is a rare and precious thing, an architectural and cultural phenomenon which is absolutely unique. It is the sole survivor of the great eighteenth century northern cloth halls, a class of buildings which embodied the vital and dominant importance of the trade in hand woven textiles to the pre-industrial economy of the West Riding of Yorkshire, from the Middle Ages through to the early nineteenth century.

Dating from 1779, when it was built as a Cloth Hall for the trading of ‘pieces’ of cloth (a 30 yard length of woven woollen fabric produced on a handloom), The Piece Hall was the most ambitious and prestigious of its type and now stands in splendid isolation as the only remaining example. It is one of Britain’s most outstanding Georgian buildings.

It is impossible to overstate the scale and importance of this trade, not just to the history of Halifax and the West Riding, but to the nation as a whole over some 800 years between the twelfth and eighteenth centuries.

When it was built, The Piece Hall was a highly visible statement of the great wealth, pride and ambition of the cloth manufacturers. Although built for trade, it also embodied the most cultured sensitivities of the Enlightenment; these bluff northern manufacturers deliberately chose a design for their building which adapted the neo-classical orders of architecture derived originally from the Romans.

rom its inception, The Piece Hall was a stunning combination of commerce and culture, an icon of hard business but also a broader statement about the history, the lives and the values of its surrounding community. This fascinating mix of purpose and idealism – business, arts and people, continues to influence and drive The Piece Hall’s role today. A direct link back over almost a quarter of a millenium of history.

Wander the creative, bohemian streets of Hebden Bridge, and you can feel the influence of the writers and artists who flocked to the town around the 70s and 80s. From artisan shops and inspiring galleries to organic pavement cafés and charming picture houses, the town is justifiably proud of its artistic identity. Just a few minutes away you will find pretty wooded valleys and picturesque heather moorland.