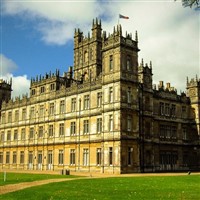 Enjoy a break taking in the backdrop to the period drama 'Downton Abbey' where we visit Highclere Castle and enjoy summertime in the Cotswolds.

Whilst on tour the following programme includes;

Located at the gateway to the Cotswolds, Swindon Marriott Hotel has spacious rooms and suites which feature plush bedding, flat-screen TVs, ample desks and Wi-Fi. Take advantage of their fitness centre, indoor pool and tennis courts. Enjoy locally sourced cuisine and relax in the hotel grounds.

It is not possible to display the home pick-ups map because JavaScript is disabled in your web browser.

It was not possible to contact Google to display the home pick-ups map. Please try again later.

The map below can be used to check the price of a home pick-up. The map shows the price bands for each area we service. To check the price from your address either click your street on the map or enter your postcode or city/town and click the 'Check Price' button.

Check Price Please enter a location The location was not found